Meditating the Anxiety Away

I don't remember for sure why I started meditating in July or August of last year. I know at one point I read somewhere about people who claim to achieve psychedelic states through meditation, without drugs, and that intrigued me. I also know that I spent much of last year trying to conquer my lifelong struggle with poor sleep, and some of my first forays into meditation were guided meditations meant to help you fall asleep and sleep deeply (I've had moderate success with these). I also know that not long after I started meditating somewhat regularly, my friend MJ started offering free meditation classes that covered fascinating neuroscience topics (one of my obsessions this past year) and introduced me to several different meditation techniques.

One of the things I realized early on, now that I was paying more attention to what my brain was doing, was that I was in a near-constant state of anxiety. My brain was perpetually yapping at me about all the things I could possibly worry about--that thing I'd said wrong yesterday, that thing I might do wrong tomorrow, that horrible thing that almost happened to me this morning but didn't (but what if?!), that hypothetical argument I might have with someone next year, that time I embarrassed myself in second grade. I found myself latching onto these real and imagined fears, then circling around them over and over long past the point that horse was beaten and dead and then beaten some more. This happened to coincide with some health issues that made me realize just how much my constant state of stress was affecting my body. The more I saw how this neverending internal monologue was interfering with my ability to enjoy life, the more I just wanted my brain to shut up.

Luckily for me, getting your brain to shut up is one of the goals of meditation, which by this point I was already doing on a daily basis. More specifically, meditation has been shown, in numerous studies, to be an effective treatment for anxiety. It was nice to recognize that I had a problem and discover almost simultaneously that I was already implementing a potential solution to the problem. 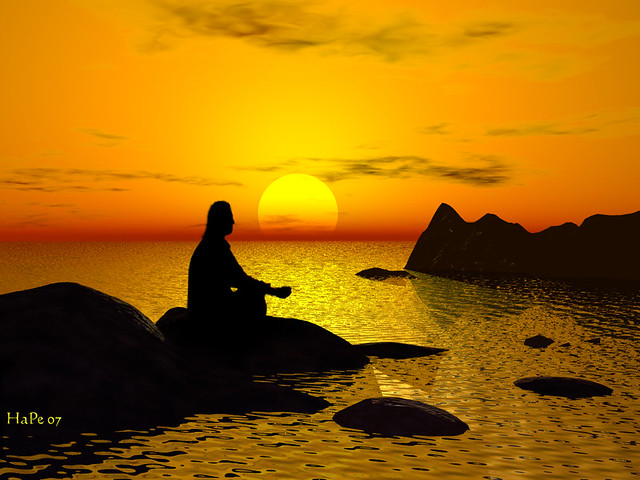 I should point out that I've never been diagnosed with anxiety by a mental health professional; this is purely a self-diagnosis. I also know that my anxiety is not as bad as some friends for whom anxiety is crippling--I've never found myself unable to get out of bed, to do the things I needed to do, or otherwise live my life because of anxiety. So I don't pretend to compare my problems to those who have it much worse, or to claim that meditation is the solution for everyone. Nor would I discourage anyone suffering with anxiety from seeking help from a mental health professional. I've seen therapists for various reasons in the past, but never discussed anxiety because until a few months ago I didn't realize that what my brain was doing was unhealthy--it was all I knew. And like I said, it's never prevented me from doing the things.

But I will say that, for me, meditation has been life-transforming. For the first few months I tried out several different types of guided meditation; my favorites were body scans and self-inquiry. I spent a month or two focusing on the teachings and techniques of Gary Weber, a guy who achieved a permanently egoless state after thousands of meditation hours and who teaches that lasting happiness comes with the complete dissolution of thought. After obsessing over that effort to rid myself of thoughts for a while, though, I realized that obsession with overcoming anxiety is kind of counter-productive, so I eased up. More recently, I reacquainted myself with Byron Katie, who emphasizes in her teachings that you can't make yourself stop thinking a thought, no matter how unhappy the thought makes you; instead, you simply question the thought, recognize how it's affecting you, and let your brain do the rest on its own time. For the past month or so I've left the guided meditations behind and have settled into a daily routine of silent meditation accompanied by an audio track of waves crashing on the beach. (The irony here is that when I was a child my mom had to bribe me to get me to the beach, but now apparently it's my happy place.)

It took a few months to really see the benefits of meditation, but I can definitely say I'm seeing them now. I've started waking up an hour early to meditate, and I look forward to it so much that getting out of bed is easy; my morning meditation hour, sitting quietly on the couch with blankets to keep me warm and cozy, is one of my favorite parts of the day. I spend more of my day noticing my surroundings and noticing what my brain is doing. When I find myself having non-productive, anxious thoughts, it's becoming easier and easier for me to gently return my focus to my breathing and forget about the pointless, stressful thought. More than anything, I find myself spending much more of my time in the present--with my mind quiet, the world around me becomes crystal clear, like I'm experiencing reality in 4K Ultra HD compared to the foggy low-res experienced through the filter of anxiety, and this sensation makes the most mundane, everyday moments feel glorious.

The funny thing is I have a pretty great life, and it's been that way for years. I think my brain learned throughout childhood and early adulthood that life is something to worry about rather than enjoy, and now it's just a matter of retraining it. The fact that daily meditation has had such a profound impact in such a short time makes me look forward to what it can do over the course of the coming years. But then I gently remind myself, it's not about what the future will bring; it's about where I'm at now. As for the supposed psychedelic effects? I'm not hallucinating melting rainbows or anything, but I'm experiencing life more fully, and I'll take that over hallucinations any day. (That said, I won't complain if the hallucinations show up later. Because melting rainbows would be amaze-balls.)
Posted by B.G. Christensen at 7:47 PM