Patriotism has never sat well with me. I dislike the sentiment that America is the greatest country in the world because while patting ourselves on the back it insults everyone else, because it's a statement based in irrational emotion and not on measurable fact, and because there is and always has been so much about America that is not great--racism, sexism, homophobia, xenophobia, economic inequality, political and religious tribalism, and on and on. I dislike the association patriotism has with the values of Republican, Christian, gun-toting, MAGA-hat wearing, straight, white, cisgendered people because I don't identify with those values.

While at a Janelle Monáe concert this past weekend, though, I realized that maybe there is a version of patriotism that I can get behind. In her song "Crazy Classic Life," Monáe describes herself as "young, black, wild, and free," then proclaims, "I am not America's nightmare / I am the American dream." I love how she, as a queer black woman, reclaims the traditional narrative of the American dream, the belief that all men and women are created equal, and insists that dream is not the property of straight white men. This vision of America is one that I find worth celebrating.

I celebrate the Enlightenment ideals of reason and equality that America was founded on. I celebrate the good that George Washington, Thomas Jefferson, Alexander Hamilton, and the other founding fathers gave us. I can do so while at the same time condemning the way they enslaved Africans, slaughtered Native Americans and stole their land, and treated women as property. The founding fathers may have been too ignorant to recognize the irony and the limitations of their version of "all men are created equal," but the system they built on principles of democracy, freedom of speech, and freedom of religion made way for future generations to take what they left us and make it better. That is my America.

I celebrate Susan B. Anthony, Sojourner Truth, Elizabeth Cady Stanton, and their fellow Sufragettes who led the movement to give women a voice in America's government. I celebrate Gloria Steinem, Betty Frieden, and other leaders of the women's liberation movement. I celebrate Ruth Bader Ginsburg and other women who have fought for women's rights within our legal system. I celebrate writers and artists like Maya Angelou, Alice Walker, Nina Simone, and Beyoncé who speak to the experiences of black American women. I celebrate Hillary Clinton, Elizabeth Warren, and Michelle Obama. I celebrate Roe v. Wade. I celebrate the #MeToo movement and the Women's March. This is my America.

I celebrate Marsha P. Johnson, Sylvia Rivera, and others who led the Stonewall Riots that ignited the flames of the LGBTIQ rights movement. I celebrate Harvey Milk, José Sarria, and Chad Griffin. I celebrate Sylvia Mock, Dan Savage, Ellen Degeneres, and Anderson Cooper. I celebrate United States v. Windsor and Obergefell v. Hodges. I celebrate the Trevor Project, the Human Rights Campaign, Lambda Legal, and other organizations that continue to fight for the lives and rights of queer people. I celebrate the Provo Pride festival, the Encircle LGBTQ+ Family & Youth Resource Center, and the LoveLoud Festival, which have created safe places to celebrate sexual and gender diversity in my conservative community. This is my America.

I celebrate similar progress that has been made in other countries all over the world. I celebrate those of my fellow Americans who see beyond our national pride and our tribalism to recognize ways that others may be doing better than us in areas such as education, healthcare, and human rights, and seek to apply those lessons learned toward making America greater than it currently is or ever has been. I celebrate immigrants and the strengths they bring to America.

Janelle Monáe ended her concert the other night with the song "Americans," which includes this powerful speech (emphasis mine): 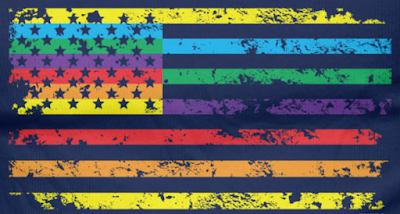