On Friday night my husband and I watched Believer, a documentary about Imagine Dragons lead singer Dan Reynolds' efforts to fight the problem of LGBTIQ youth suicide in Utah. On Saturday night we attended the primary focus of those efforts, the second annual LoveLoud Festival--a concert featuring Imagine Dragons and several other performing artists raising money to support charities like the Trevor Project, the Tegan and Sara Foundation, and Encircle. On Sunday night we watched Love, Simon, a movie about a gay kid coming out in high school and dealing with various challenges that continue for gay kids even in today's world where homophobia is less and less socially acceptable. Saturday morning I stared at my reflection in the mirror and, for the first time in thirty-eight years, was able to look at that man with judgment-free love and saw the same staring back at me. It's been an emotional weekend.

I won't say more about Believer or Love, Simon except that both are excellent films worth watching and that both left me feeling a little emotionally exhausted. Neither, however, exhausted me as thoroughly as did the LoveLoud Festival. Last year's festival was an amazing experience that made me feel unexpectedly nourished in ways I didn't know I needed to be nourished. This year I had a markedly different response. Don't get me wrong; the festival was amazing. Some of the highlights for me were Grace Vanderwaal's endearing performance (the poor girl got stung by a bee on stage!), a surprise appearance by Mary Lambert, and pretty much everything about the two-hour Imagine Dragons set. As we entered the stadium there were people handing out free light-up bracelets; little did we know, these were controlled remotely to make the entire stadium light up in various color patterns in sync with each song. It was a gorgeous sight and a beautiful metaphor for the festival--the focus was clearly on Dan Reynolds, the charismatic, sexy, shirtless rock star on the stage, but he was using his time in the spotlight to help others shine their own lights. 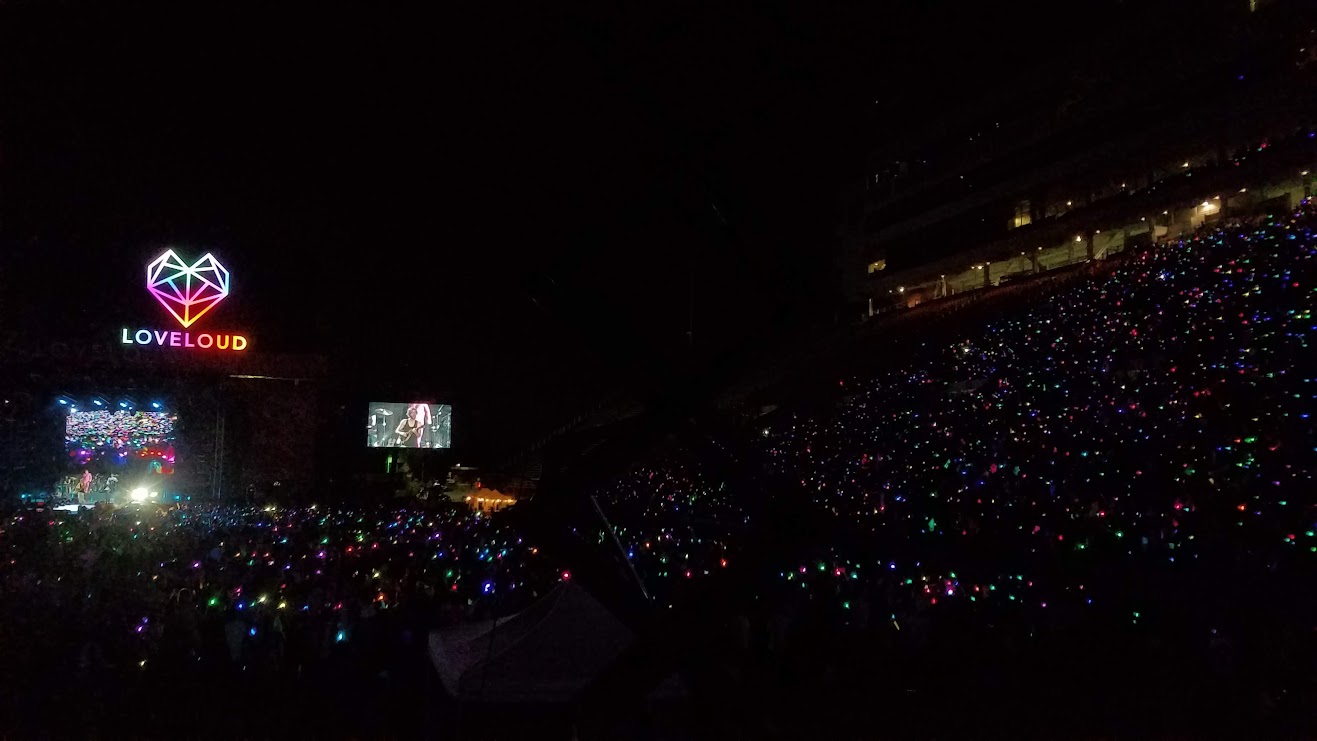 Despite everything I loved about the festival and the amount of time I spent enjoying each moment, I also spent a good portion of the show feeling really, really angry that this whole thing exists. More precisely, angry that it needs to exist. Why on earth do we need to keep telling parents to love their children, to accept them as they are? Shouldn't this be obvious to any human being? Why do you need a rock star to protect your own children from your bigotry? They are your children! It's your job to love them and protect them; when someone else needs to protect them from you, you have failed as a parent and as a human being. As Reynolds and various other celebrities stood on that stage and told the LGBTIQ youth of Utah how much they are loved and how much the world needs them, it took me a while to understand why all this exuberant celebration of my existence was making me more and more upset, until finally I realized that celebrating my existence is just the flip side of the coin from apologizing for my existence, and I'm so goddamned tired of apologizing for my existence.

Recently, a dear friend started dating someone. I was excited for my friend to be dating someone she likes, and anxious to meet him myself. My friend is Mormon, but pretty progressive in her attitudes toward sexuality and among the most supportive of my husband and me; she has defended us to more conservative Mormons on several occasions. This open-mindedness is typical of the Mormons I am still close to, for obvious reasons of self-selection on both sides, so it's easy for me to forget that many, many Mormons are not so open-minded. So when my husband and I stopped by our friend's house and the boyfriend and his kids were there, we nonchalantly introduced ourselves as husbands because, you know, that's just normal everyday life for us. I was distraught to hear after the fact that the boyfriend found our surprise introduction off-putting, because we didn't give him a chance to prepare his kids or to decide how to frame our relationship to them. In other words, he would have preferred to raise his kids in a world where we don't exist and was annoyed that he'd been forced to do otherwise, without his prior consent.

I want to be clear here: I believe my friend handled the situation in exactly the right way. She responded with empathy, understanding that his discomfort comes not from hatred but from ignorance and inexperience. He hasn't had much (if any) personal experience with queer people in his life, so all he has to go on is what he's learned at church--that gay people are choosing to live in sin, in opposition to God's plan. Of course he wants to protect his children from us! My friend understands that with time, experience, and love, her boyfriend will come around, just as most good people do when confronted with a reality that challenges previously-unchallenged beliefs. I also know that she is a good judge of character, so if she says he's a good guy and he'll figure it out, I believe her. I look forward to getting to know him, after he's done working through those issues. In the meantime, I'll give him the benefit of the doubt enough to be polite and kind, as I try to be with everyone.

What I discovered while she was telling me this, however, is that I no longer have it in me to feel empathy toward people who want to pretend I do not exist. Believe me, I understand where they are coming from. I came from that place myself, raised to believe that only part of me deserved to exist, that my existence would only be valid if I repressed and hid that part of me. I understand that worldview all too well--too well for my own good. I have worked for years to overcome that belief in myself and in others around me. I worked hard to prove to my family that the full me deserves to exist. I worked hard to prove to my in-laws that I deserve to exist in their son and brother's life. I continue to work hard to prove to my conservative Mormon community that I deserve to exist here, that I am a valuable member of their community just as deserving of my place in it as they are. In each case there have been people who accepted my existence from the start, some even before I did. In each case there have also been people who started out with the assumption that I was guilty until proven innocent, who were unsure of my value until I showed that, guess what?, I'm a pretty decent guy, as heathen sodomites go. I did my best in each case to approach these people with love and understanding, because I sincerely believe that is the most effective way to change hearts.

I still believe that's the most effective approach, but what I hadn't considered until this weekend is how much empathizing with those people while they debate whether or not I deserve to exist is damaging my psyche, how much it keeps me holding onto those old toxic beliefs about myself. As I looked out on the crowd at the LoveLoud festival, imagining that a large portion of them are good-hearted, progressive Mormons, most of whom likely had a change of heart within the last five, ten, maybe twenty years, often because they had a beloved family member come out to them and they were forced to confront the bigotry of their unexamined beliefs, I felt sincerely happy for what these people are doing, that they are making Utah a more loving place for queer people, but at the same time I couldn't help thinking, "I'm glad you all decided I deserve to exist, but I stopped listening when you tried to convince me you had a right to any opinion at all about my existence." I don't mean to be callous; you just can't let yourself care about people who question your right to exist, and still love yourself. Refusing to empathize with them is not being closed-minded; it's survival.

Lately I've been thinking about when we should and shouldn't be civil with our enemies, which at least partly comes down to a question of when we should and shouldn't try to empathize with our enemies, to understand them and love them as fellow human beings. I've decided this weekend that the right course for me is to do my best to interact lovingly with people who have opinions I disagree with, to be patient with them, to listen to them in an attempt to understand, to be open to the possibility that their position comes from ignorance instead of hate, and do what I can to gently help them be more loving--except in cases where those people hold opinions that are directly harmful to me. When others hold opinions that are toxic to people I care about but not to me personally--whether it's opinions that are harmful to women, to people of color, to indigenous people, to trans people, or to any other disadvantaged group I am not part of--I am likely to be upset, but I can manage my emotions enough to approach the conversation rationally and objectively, to listen carefully to my friends who are being hurt and do my best to help the hurters understand and stop. This is what Dan Reynolds is doing; as a straight, cis-gendered white man he has privilege that I do not, and he uses that privilege to speak up for me and others like me. With that privilege, he can approach those conversations with tact and love, inviting others to join him rather than vilifying them for not having already joined him, in ways that it just isn't healthy for me to do anymore. So can my friend with her boyfriend, and so can all those progressive, queer-friendly Mormons who filled that stadium.

So here's what I have to say to my straight allies: Thank you. Whether you came to the conclusion that the full me deserves to exist in the same world as you yesterday, last month, last year, or last century, I am glad you came to that conclusion. If you never questioned my existence, I am glad for that. If you did but you've had a change of heart, no matter how recently, I forgive you. If you feel so inclined to lovingly help the less open-hearted around you, I am most grateful to you for making the world a better place, one person at a time. But that is a fight I am done fighting. I will no longer fight for my existence. I will no longer apologize for my existence. I will no longer celebrate my existence, at least not any more or less than any conscious being should celebrate the wonder of their own existence. From now on I'm just going to exist as if I live in a world where my existence isn't up for debate. Those of you who aren't living in that world yet can join me when you get here.
Posted by B.G. Christensen at 9:30 AM