I have always been an outsider in one way or another, but never more so than in 1997 when I moved to Provo and started attending Brigham Young University as a closeted gay Mormon. It was incredibly isolating to feel that I was different from everybody around me and I couldn't talk to anyone about my private struggles. I remember sitting on the steps outside a building on campus one Sunday afternoon, pleading with God to send someone to talk to me, to hold me, to take away this miserable loneliness, and getting nothing. Nine years later, in 2006, I attended a rally in Provo hosted by Soulforce, a group traveling around the country protesting anti-gay policies on college campuses. The rally was attended by a little over 100 people. By this point in my life I was publicly out as gay even though I was married to a woman, I had many gay friends and straight allies, and I was on my way out of the church. The rally produced a jumble of conflicted thoughts and feelings in me, but one of the strongest feelings was the warmth that surrounded me as this large group of people sang the Mormon hymn "I Am A Child of God" together, all in unity with conflicted gay Mormons like me. Despite being in the process of losing faith in the religion itself, it was soul-nourishing to feel, even for a moment, like I was a wholly-accepted member of the religious culture I grew up in.


What I experienced 11 years ago pales in comparison to what I felt at last night's LoveLoud Festival in Orem. I bought tickets for the concert because I generally enjoy concerts and my husband generally doesn't, so the opportunity to see two bands he likes (and I liked well enough) within walking distance of our home was too good to pass up. The fact that the cost of our tickets would benefit good causes like The Trevor Project and Encircle added an extra feel-good aspect. I didn't realize that what I was actually signing up for was a cathartic evening that would go such a long way in healing the broken soul of the seventeen-year-old closeted BYU student inside me. People around me were laughing, cheering, having a great time, and I did plenty of that as well, but I also spent a good portion of the concert sobbing. While the 2006 rally attended by 100 was a powerful experience, last night's concert attended by 17,000 and headlined by major bands Imagine Dragons and Neon Trees, all focused on showing love for at-risk LGBTQ youth, made me feel loved and accepted within my current home community and my childhood religious community in a way I have never felt before.

Some of the moments that made me cry:


As I've written before, I'm at a really good place in my life right now. I'm happily married and I have a solid network of friends and family both Mormon and non-Mormon who love and support me as I am. I had no idea I needed community validation like I experienced last night, but apparently the seventeen-year-old and the twenty-six-year-old inside me needed it. If you run into me and see my soul glowing, now you'll know why.

Evolution is My Religion

In my experience, many religious people don't understand how atheists find any purpose or meaning in life. Without God, they ask, what's the point? Every atheist will have a different answer to this question, and even I could come up with several answers that ring true to me, but lately my answer is this: Evolution is my religion. My purpose is the preservation of the human race. My meaning is derived from knowing I have a place in this grand venture.

Stripped to the barest roots, you could say I served my evolutionary purpose by reproducing--three times, in fact. Beyond that, I have a responsibility to ensure my offspring survive to adulthood and have the means to survive after I'm no longer caring for them. So is that it? The purpose of life is to make babies and raise them? While many--myself included--find fulfillment in parenting, it doesn't make sense to me for that to be the be-all, end-all. Do people who have no children, by choice or by circumstance, serve no purpose? I simply can't believe that.

The key lies in the one thing that separates human beings from every other species that we know of--our intelligence. The most amazing thing evolution has ever achieved is producing a species intelligent enough to overcome the physical limitations of evolution. Sure, fur might keep some animals warm during the winter, but having the brains to start a fire or build a house or develop the technology for central heating is much more adaptable, capable of solving many more problems than just being cold. We've evolved to the point now that we are no longer limited by the survival of the fittest; we have the means to keep all of our species alive, including the weakest. This is actually an evolutionary advantage, because the traits that are valuable to our species' survival today may not be the same traits we need to survive tomorrow. Diversity is strength.

So on a macro scale, we contribute to the survival of the species through advancements in science and technology. On a micro scale, each of us has a purpose, even if we aren't Einsteins or Newtons. The thing about intelligence is that with it comes self-awareness. We are smart enough not only to survive, but to ask whether we want to survive. The only way the human race will continue surviving is if we have motivation to do so. In short, it's our job to make life worth living. I can do this for others by finding ways to make their lives happier, more meaningful. It's equally important that I find ways to make my own life happier and more meaningful.

Evolution's dictates, then, are (1) be happy, and (2) help other people be happy. Maybe you've come to a similar conclusion via religion, but for me it comes down to doing what my genes programmed me to do. That is my purpose. That is my meaning. Evolution is all the religion I need.
Posted by B.G. Christensen at 8:27 PM No comments:

Dora the Explorer vs. Donald the Trump

The children's picture book Dora Saves the Enchanted Forest, published in 2011, is the book America needs in 2017. In this book, Dora the Explorer and her monkey Boots, known for their skill at climbing tall mountains and counting in Spanish, confront Owl, a cruel despot who is clearly a prophetic metaphor for President Donald Trump. 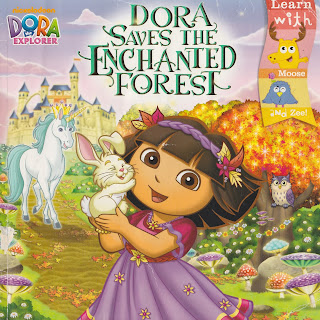 At the start of the book, the Enchanted Forest is a land of seemingly limitless freedoms--honeybees sing, puppies try to fly, and oak trees play hide-and-seek--obviously a metaphor representing our own land of the free, America. The Enchanted Forest is ruled over by King Unicornio, who we can tell is Latino because of his name, and we can tell he's gay because he's a unicorn. This will be important later. 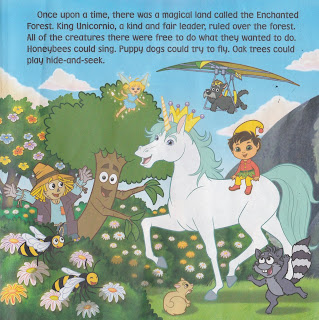 King Unicornio is deposed by Owl, who's clearly a jerk. With a complicated plan involving a wall that our Latino hero has to pay for, Owl takes power. 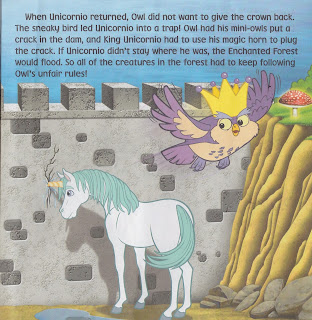 Once in power, Owl immediately starts throwing crazy laws around and banning specific groups from the Enchanted Forest: scarecrows, crows, elves, and fairies are all unwelcome in Owl's Enchanted Forest. 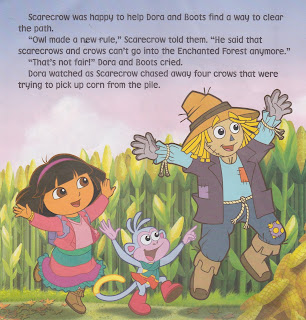 Thankfully Dora, who is also Latina, sneaks in despite Owl's travel bans. She then hires some illegal immigrants--the elves--to fix Owl's wall so King Unicornio can worry about more important concerns. 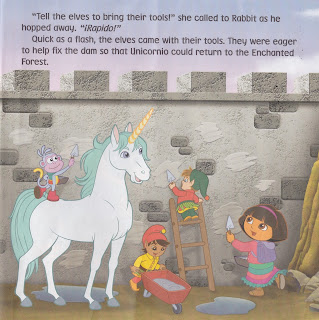 Now free, King Unicornio reclaims the kingdom and proclaims the Enchanted Forest is for everyone! He also forces Owl to stop being a jerk and do some community service for his crimes. 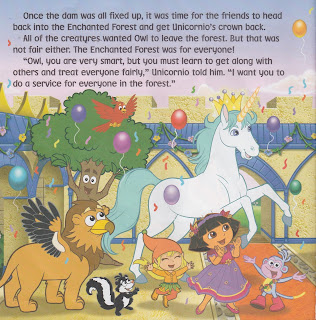 So what can we learn from this prophetic book? Clearly, if we're going to rid America of our own cruel despot, Donald Trump, we're going to need our own King Unicornio. But who could fill this role? Who will be our gay Latino hero? Save us, Ricky Martin!
Posted by B.G. Christensen at 6:16 PM No comments: