Last week I lay in bed in our vacation rental in Hawaii, my head resting on my husband's chest, and my brain broke. "Does not compute," it said. "This much happiness is not possible." Being in the middle of a week-and-a-half-long vacation with our children in a beautiful place where I have many happy childhood memories certainly contributed to my bliss overload, but the truth is I have felt the same thing on several occasions in the past couple of years, often when I wake up next to him in our bed at home or while snuggling on the couch, watching TV. My brain simply doesn't know what to do with the fact that I am married to a man I'm intellectually, emotionally, physically, and sexually attracted to, and that we have a really good life together.

My mom did not have a happy life. She had a difficult childhood in which she felt she was expected to raise her younger siblings, she left her first husband because he beat her, her second husband left her, she raised seven children largely on her own, she worked hard as a waitress to support us, after finally getting a college degree and a good job she suffered through health problems that forced her into early retirement, and then she passed away after a painful battle with pancreatic cancer. Despite her seemingly constant challenges, though, she often smiled and laughed. Growing up, I learned from her that life sucks but you can choose to be happy anyway. One of her favorite books was Man's Search for Meaning by Viktor Frankl, which is about (among other things) how Frankl found ways to remain positive even while imprisoned in an Auschwitz concentration camp.

The coping skills my mom taught me proved incredibly valuable as I struggled through a pretty difficult childhood myself. We were poor, my dad lived an ocean away and I had no meaningful relationship with him, my mom constantly fought with my older sisters and I was often called on to mediate, I was bullied for being white, and I was gay in a religious environment that taught me being gay wasn't even a valid option. Looking back on it now with a bit of objectivity, I feel like I had a pretty crappy childhood. Yet, as I said above, I have many happy memories of that childhood. Of course part of this is that there were genuinely good times mixed in with the bad times, but it's also thanks to the positive thinking philosophy my mom taught me. If Viktor Frankl could be happy in a concentration camp, after all, surely I could be happy through my relatively minor struggles.

The thing my mom didn't teach me, because I'm not sure she really believed it, is that sometimes life can be really good. Sometimes you can just be happy without trying. The problem with believing that life will always be horrible, that it's all about the trials and tribulations, is that you're less likely to work toward making your life happier than it is. God grant me the serenity to accept the things I can't change, by all means, but don't forget the part about the courage to change the things I can. As a child, there wasn't a whole lot about my circumstances I could change, so learning to have a positive attitude regardless of my circumstances was a necessary survival skill. As an adult, I have a lot more control, but it's taken me years to learn to exercise that control rather than just accept whatever circumstances life hands me.

Given my mom's experience with marriage, it's no surprise that I was cynical when it comes to finding happiness in a romantic relationship. You're never going to find someone that you're perfectly compatible with in every way--intellectually, emotionally, physically, sexually--so you might as well just pick someone you get along with well enough and choose to be happy. There's some truth to this, because there really is no such thing as a perfect relationship, but I went to an extreme when I allowed religious influence to make me devalue the physical and sexual aspects completely, marrying someone I connected with emotionally and intellectually, but who wasn't even the gender I'm attracted to. I later came to realize that yes, I am capable of choosing to be happy in fundamentally unhappy circumstances, but that's no reason not to change my circumstances when I can. I still had a lot of my mom's cynicism about relationships, though, so honestly I'm lucky to have married someone who makes me as happy as my husband does. My requirements were basically someone I could get along with and who I was attracted to (I added a second requirement to the one I'd had the first time), so as the years progress and we get to know each other better, I'm delighted by each new way I discover that he is customized to specifications I didn't dare hope for. Life will never be perfect, but it turns out it can be pretty darn wonderful. 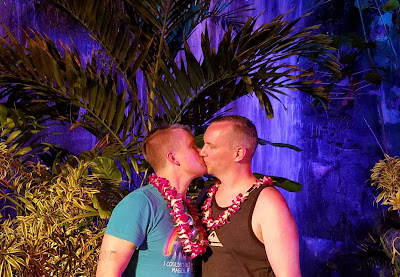