It took me two years in this house before I started painting it to make it my own. It took me thirty-seven years in this body. For much of my life I had no interest in tattoos, but in the past year or so I've become more and more intrigued by the idea of transforming my body into a canvas for my art. It wasn't until this past February that I came up with a design that I wanted to put on my body, and then I waited three months to be sure this wasn't a passing whim. I now have two tattoos and I love them.

As I thought about what kind of tattoos I'd be interested in, I knew that the design had to be my own--I wasn't going to point at someone else's tattoo and say, "I want one of those." The whole point of it for me is artistic expression. I also knew I wanted something bright and colorful. Most importantly, whatever I put on my body needed to have meaning.

I came up with a pair of complementary tattoos for my two shoulders: 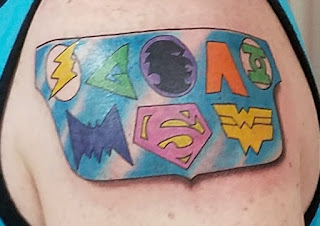 On the left shoulder I have the Justice League. More specifically, I have the Justice League shield with the emblems of what I consider to be the most iconic members of the League: Superman, Batman, Wonder Woman, Aquaman, Flash, Green Lantern, Hawkman, and Green Arrow. There are few things so intrinsic to my core identity as my love for superheroes. I realized last week that April was the 25th anniversary of my first superhero comic, so I was happy to get this first tattoo done before the month ended. Originally I drew the design in Paint just as a mockup, but I decided I really liked the imperfectly-proportioned, assymetrical, cartoony look. To me that captures the fun, youthful energy I was going for--I didn't want a tattoo that took itself too seriously or looked like I was trying to be a badass. The color palette was also important to me; I went with magenta instead of red in Superman's shield because I wanted bright pastels, and I chose purple for Hawkman's emblem even though it's traditionally red because I wanted all the colors of the rainbow. It's my way of showing gay pride without something as obvious as a rainbow flag or an equality sign (although I considered both). 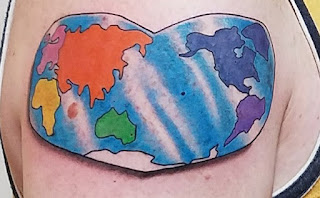 On the right shoulder I have a heart-shaped, rainbow-colored globe. Again, I went for cartoony rather than realistic, and kept the same color palette as the other shoulder. The globe represents my love of travel; as I travel to new countries and continents over the course of my life, I plan to add dots to those locations in the tattoo. The heart shape is a cheesy reference to global unity, peace, love, granola, all that. The seven continents also remind me of the seven most important people in my life: my husband, our five kids, and myself. I intentionally included myself there because sometimes I need a reminder to love myself and to value myself as much as I value others, so now I will have that reminder every time I look in the mirror.

I couldn't be more pleased with the work Chris Corvi at My Pride Tattoo did. He took my design, stayed true to my vision, and improved on it. I love the shadows and the gleam he added to the blue backgrounds--both were elements I'd crudely represented in my mockup, and he made them look fantastic. I love that I have art on my body now. I'm already starting to think of what I'll do next.
Posted by B.G. Christensen at 8:39 PM