Twenty-five years ago I bought my first superhero comic book. The cover date was April 1992, which means it was actually published in February 1992, for reasons that are unclear to me, but I'm going to go ahead and call April 2017 my 25-year superhero anniversary. The book was Batman 476, and the cover featured Batman revealing his secret identity (gasp!) to Vicki Vale. 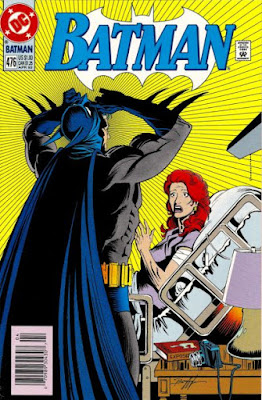 I was twelve. I had always loved Batman, whether on reruns of the 1966 Adam West TV series or on Super Friends. When I was little I'd had pajamas featuring Batman and Robin, and another set featuring Superman. My older sister had made me a reversible cape that was Batman on one side and Superman on the other. When the Michael Keaton movie came out in 1989, I got special permission from my mom to see it even though it was rated PG-13 and I was only nine. That movie kicked off a renewed phase of Batmania in American culture, and I loved that it transformed a beloved character from my early childhood into a kickass character my pre-adolescent self could appreciate.

I don't remember what inspired me to pick up that Batman comic. I know I was fascinated by the cover of this particular issue because of the seemingly seminal moment it portrayed; was I getting in on Batman comics just as he was going to reveal his most guarded secret to the woman he loved? As it turned out, no, I wasn't--the story shows Batman imagining what it would be like to reveal his secret identity, but he doesn't actually get around to doing it.

Despite the mild disappointment of the cover fake-out, I was hooked. The gorgeous art by Norm Breyfogle portrayed a sexy, muscular, dynamic Batman. He wore the familiar blue and gray colors that recalled the campier Batman of my young childhood—as opposed to Michael Keaton’s black rubber suit—but Breyfogle made that costume look cool with its long bat ears, pupil-less white eyes, and skintight fit over an athletic physique. Breyfogle remains my favorite Batman artist to this day. The story itself, written by Alan Grant, was dramatic and exciting in a way that connected with me, even though it was the final part of a multi-part story. The story felt very grown up to me, compared to the Batman of my early childhood, and that made me feel grown up. Like Breyfogle, Grant also became one of my favorites.

Batman was a gateway drug for me. From there I quickly branched out to the Justice League, the Teen Titans, and every other DC character I could afford to follow with my meager teenage income. I loved the brightly-colored costumes (shocking, I know) and the perfect male physiques (also shocking), but more than anything I loved that these characters had fifty years of history behind them, and that history was continuing to unfold in a shared universe. You never knew when a Batman story might reference a Superman story from a decade prior. I spent the rest of my adolescence digging through back issue bins to fill in the gaps of that history that I couldn’t fill in at the library. I spent lunch recesses in the school library, reading and rereading the few collections they had there. I took frequent bus rides to the state library to check out their collections, as well as a superhero encyclopedia I checked out so many times I may as well have owned it.

I could psychoanalyze my reasons for diving so deeply into the world of superheroes. The universe these characters shared was a fantasy I could fully immerse myself in when the real world sucked—as it did for me through much of my teenage years. The characters became friends I could connect with at times that I was afraid to connect with real people. One of the primary conceits of the genre, the secret identity, was something a deeply closeted gay Mormon kid could relate to. And so long as I was unwilling to let myself fall in love with real men, being in love with fictional characters was a safe outlet. (One of my sisters once expressed concern that I was attracted to men because all those scantily-clad, large-breasted women in my comic books had desensitized me to female beauty. All I could think was, Do superheroines have large breasts? I hadn’t noticed.)

Honestly, I don’t know why I fell in love with superhero comics, and I don’t know that it matters. I’ve been following these characters through twenty-five years of ongoing stories. I’ve seen favorite characters die and come back to life, grow old then get retconned young again, get married and unmarried and married again, and have children who’ve grown into new favorite characters. I’ve been through three Robins in my comics-reading life and have gotten to know three others through the back issue bins. I always thought I’d eventually grow out of this thing, but twenty-five years later that hasn’t happened yet. Maybe it’s just that my reasons have changed—as a teen the stories made me feel grown up, but as an adult they make me feel young again.